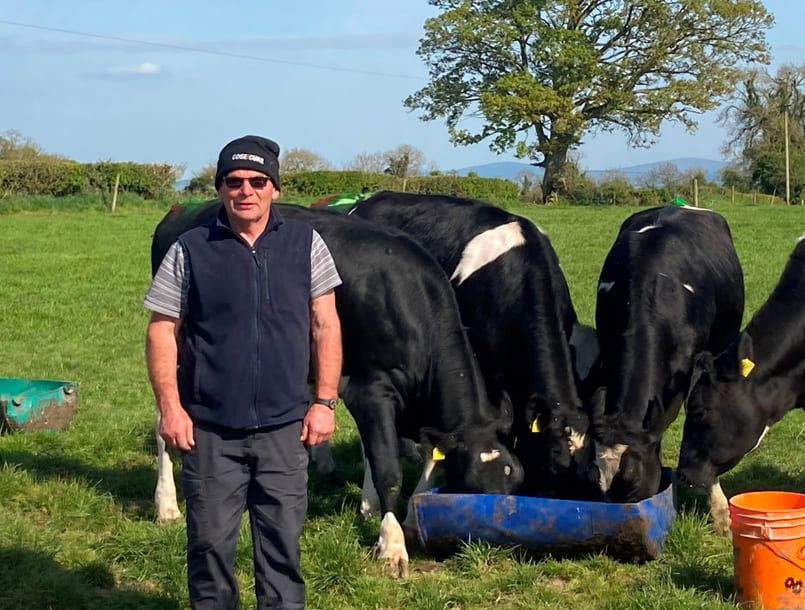 Brian, Hazel and Mark Gray run the Gray Dairy Farm Partnership in Co Kildare, which was originally a traditional liquid milk operation before converting to spring milk production in 2013. The team have 95 dairy cows and replacement stock on 55ha, and their emphasis has been on maximising milk from grass.

The Grays are renowned for their dedica¬tion to quality and employing best practices for health and productivity on-farm. Their calving interval and bulk SCC were the best in the Kildare Holstein Friesian Club in 2020 and they were one of the 500 lowest SCC herds supplying milk to Glanbia in Ireland in 2019.

In 2016 and 2017, the herd started to experi¬ence issues including fertility problems, retained placentas and neonatal calf losses. The Grays knew they had to get to the root cause of these issues.

Brian commented: "We were already aware that the soil contained high levels of molybde¬num and suspected that this might be playing a role."

The Grays were right; high levels of ingested molybdenum can combine with iron and sulphur in the diet to form a compound call Thiomo¬lybdate. Thiomolybdate binds with copper co-dependent enzymes in the bloodstream (which are vital for fertility) and renders them inactive. This process is called thiomolybdate toxicity, although it is often colloquially referred to as copper lock.

Brian added: "We wanted to take a scien¬tific, diagnostic-led approach to the issue and enlisted the help of two experts in ruminant nutrition from the UCD Vet School. Through the analysis of soil samples, herbage fresh grass, conserved grass, blood samples and a liver biopsy, the team concluded that high levels of ingested molybdenum were leading to copper lock (thiomolybdate toxicity), which was in turn resulting in the herd's fertility and health issues.


Since implementing the CoseIcure boluses into our protocol, we have experienced significant improvements in fertility, neonatal calf losses and retained placentas

The UCD team suggested the CoseIcure soluble glass trace element boluses as part of a programme to address these issues."

The CoseIcure boluses contain a unique form of copper (ionic copper) which is available at the same pH as the rumen and is able to combine with thiomolybdate there. This, in turn, prevents thiomolybdate from passing into the blood¬stream and causing copper lock. The CoseIcure boluses are particularly good in situations where high molybdenum is a factor, as is the case on the Grays' farm.

This farm has seen solid improvements in breeding performance across all key reproduc¬tion parameters since the introduction and use of CoseIcure cattle bolus.

Brian concluded: 'Since implementing the CoseIcure boluses into our protocol, we have experienced significant improvements in fertility, neonatal calf losses and retained placentas. Our cows are in good condition all the time with shiny coats, strong heats and better submission rates. Our calves are healthy and sturdy. I swear by the CoseIcure boluses and would recommend that farmers experiencing similar issues speak to their vet about whether CoseIcure boluses could be right for their herd too.'

Nutritional supplementation of any kind should only ever be given on the advice of a veterinarian, nutritionist or animal health adviser, where appropriate diagnostics have taken place and a need for supplementation has been identified. Where over supplied, trace elements can result in toxicity, particularly copper and selenium.

By accepting you will be accessing a service provided by a third-party external to https://www.bimeda.ie/